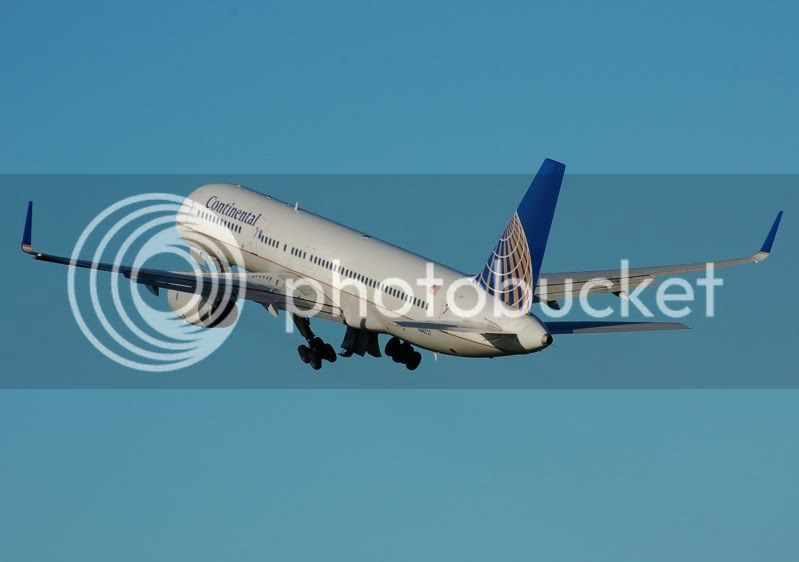 Things are going well though, so I'm not just moving blindly into the future. Went home last night and got a big hug from my baby sister (Alannah), although the first thing she said to me was "Where's Joshua", but I wont take insult, haha. Feeling like I'm settling back into life alright, things are panning out in their own way in most respective parts of my life. Got a new hamster, meant to get a boy but the pet shop seems to have given us a girl, but she is great. 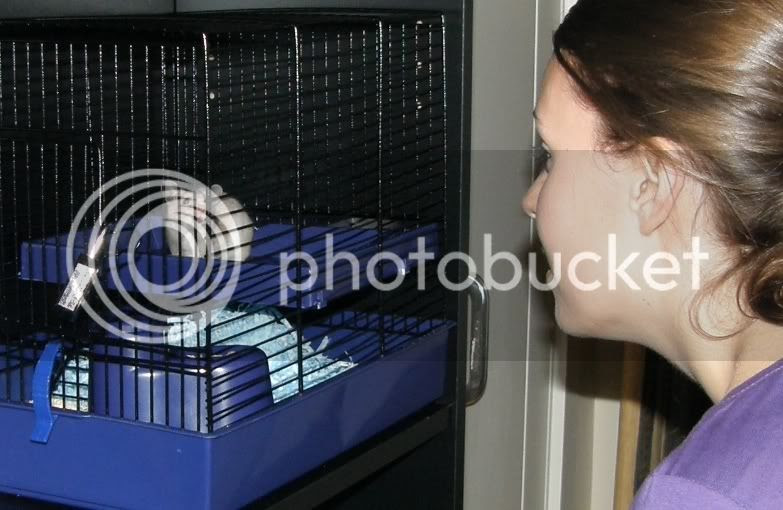 Nuvola, named because she looks like a little fluffy cloud. You can see I've upped security on the cage too, although she is much smaller than Bear was, and it was probably me leaving the cage a jar rather than Bear breaking out (although, with a name like Bear being a jailbird doesn't seem far fetched). She's also much more nervous, we think it's because the petshop hadn't really handled her, so we're trying to spend time playing every day, to get her used to us. Odette says girls get more mean too as they grow up, so fingers crossed Nu plays nice and likes us.

Experiment is going well too, got a ton of data this morning, filled a floppy! (yes, I have to use floppy disks every day, it's amazing) 43 files of signal data to analyse before I get back down to the lab, although I might just get a few more signals with a slightly different setup before the day is out, I can always analyse the data on the laptop over the weekend. I do enjoy my work, it's just that most of the time I don't get to do it, I just have to fix things and that gets dull (as I'm sure this fludge is getting!) 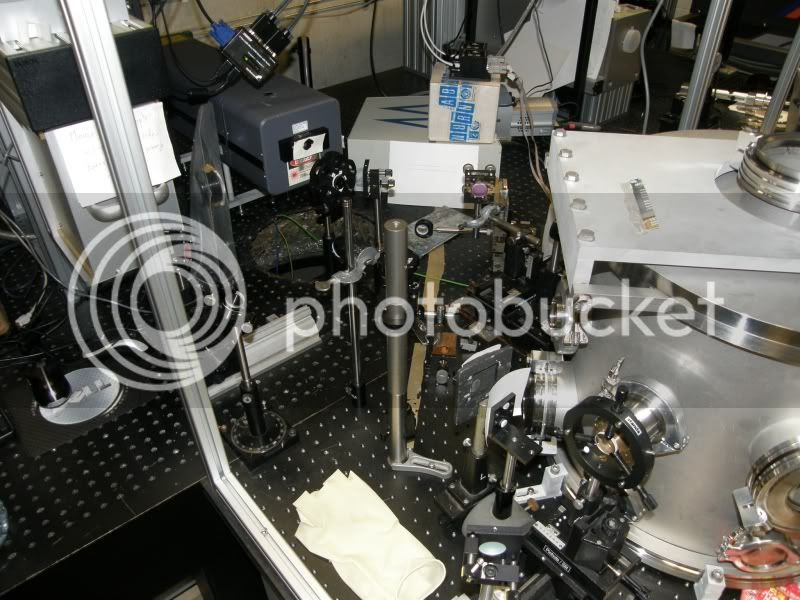 I've been cooking lots recently too, I want to take pictures of things I cook, because I like how they look (that and I feel like I don't use my camera enough...) it's not that I cook anything spectacularly unusual or difficult, but damned if it isn't tasty. I'm thinking about having people over for a mock-dinner party, be nice to cook for a crowd (cooking with Odette is always the best, because she has a good pace, I'm a bundle of chaos cooking). 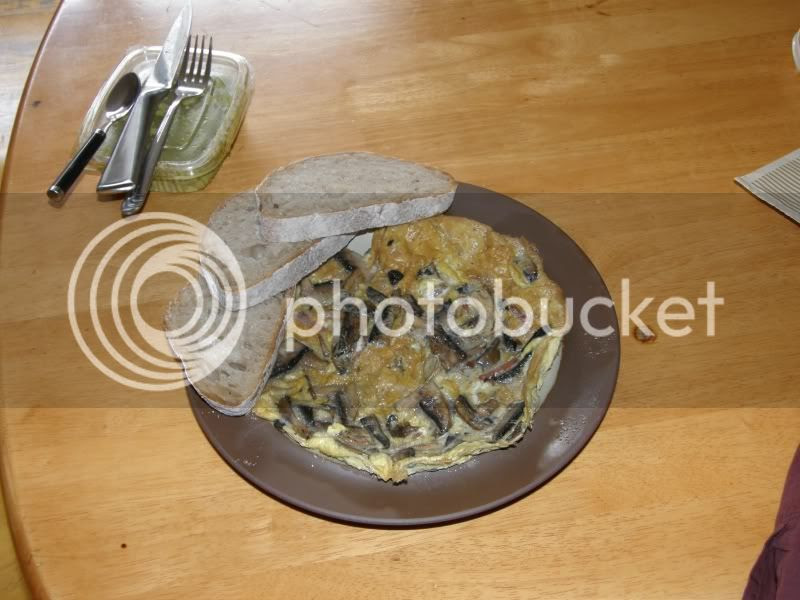 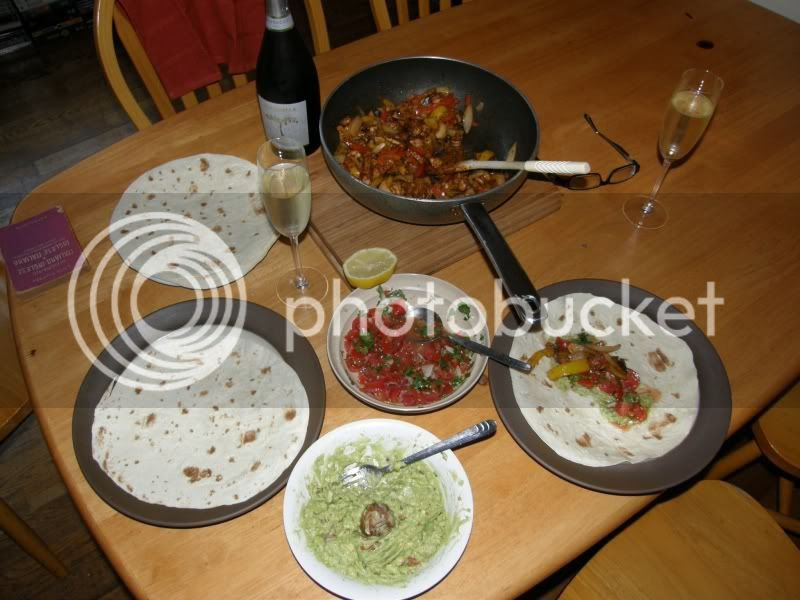 Also, another star spotted from my window! Matt Berry (of The IT Crowd, among other things) was at The Duckworth Lewis Method on Wednesday evening, saw him smoking after the gig outside the stage door and the crowd of them were all hanging in and about the stage door till 1am (really should have just went and asked him for an autograph [and if he wanted a cup of tea or a beer in the apt. haha]). 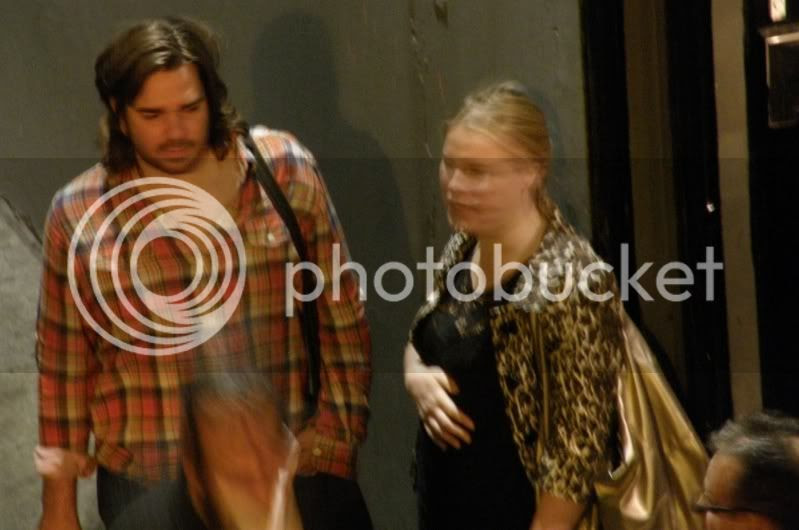 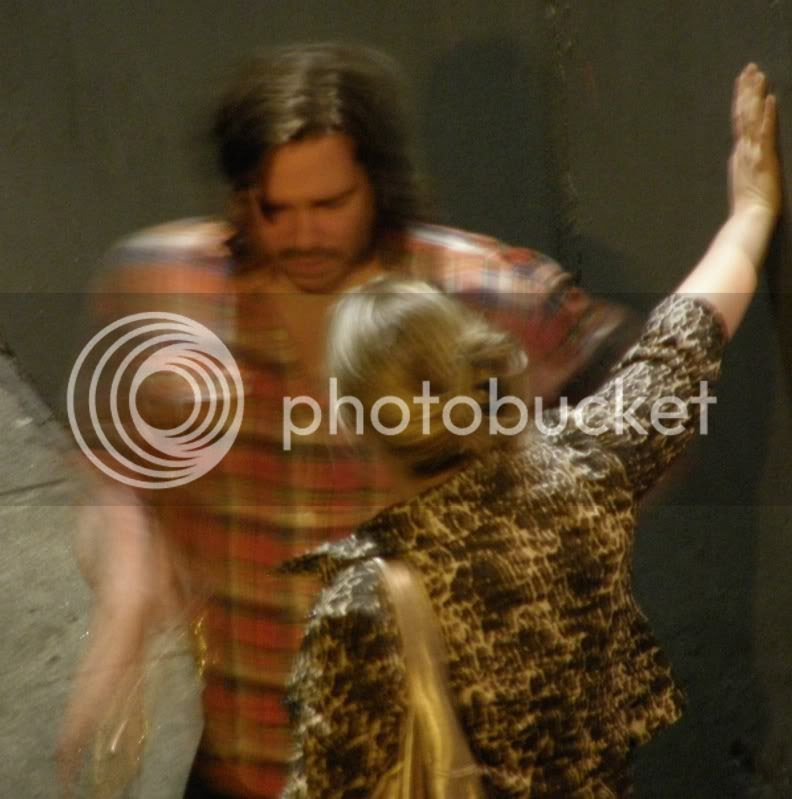 So that was most of my week really, it was a good week and I'm hoping the weekend will round it off nicely!
Posted by Zakerius at 1:42 pm 4 comments:

You don't need to tell Me you know, I'm the one who Lives here.

July is an odd month, I've decided, it's just not normal, not the sort you'd invite over to have Flones and tea. But none the less I have tried to enjoy this month, it has had high and low points like every good iteration. I am still left floundering in my experiment, but I am so close to the wide open sea that I can smell it (physics smells like spicy tomato and lentil soup today, damn tasty). But I'm not to complain, anyone who knows me knows that I do that too much.

I went to see The Terminator last night in The Screen with Oswald Coblepot, Stephen K., Garry W., and City Talker? Yeah, those guys. It was good fun, such an amazing, awful movie. Ferris Bueller Day Off is out there 7th August and they are taking suggestions for more 80's movies to show, I suggested They Live, because it is a great movie and would be great to see on the big screen, but there are so many 80's gems that should be let out more often (I just wish Cineworld would do more of this type of thing, as I already have my unlimited card there).

I try to be happy all the time, I really do, keep the laughter rolling on, but I must say, there's been a lot of just looking into space this last 2 weeks, thinking and trying not be sad. And there is something about a head cold that just makes me feel defeated, like I shouldn't bother, just stay in bed. My knee isn't helping either, I'm limping as bad as the Terminator was. I got a beautiful little baby Syrian hamster, we called him Bear, on the 12th of July. He was great, such a cute little thing and very good, and then the following Sunday night, not a week from getting him, he got out of his cage (I guess I didn't close the cage door properly, it's the only explanation really). Poor little guy, haven't seen sight nor sound of him since Sunday morning when I fed him, I felt so awful, still do, I feel awful when I kill a plant, let alone a cute little hamster... 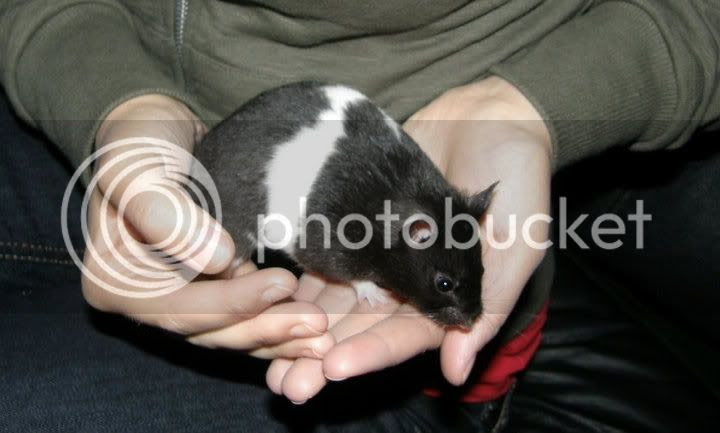 But yeah, positive, yeah, things going well, experiments yielding useful results, gaining understandings, getting organised and geared up for the big bad transfer report. Apartment is getting clean, slowly, lots more to do, still have to get a routine, don't enjoy chaos that much, though it does keep you on your toes, nice to feel busy, always good to get to tick things off the To Do list, even if the list seems never ending (and quite probably isn't, but that's not for now).

Anyway, I'm going in circles and my soup is long finished, time to return to the lab and work.
Posted by Zakerius at 12:02 pm 1 comment:

So what I didn't

You can't make me anyway,
I'd like to see you try,
You and your whole army.
Yeah.

So on Wednesday I was an archer in Camelot, the king, Uther Pendragon, had just died and Merlin and Morgana had came to pay their respective respects. This made all us castle guards very uneasy, it's not every day that the castle has such powerful visitors. Morgana arrived on horseback (despite her clear lack of horse riding ability) and Merlin arrived at strong pace, on foot. Needless to say I never get told anything, but my battle wound was at me all day in that breeze. We were given very fancy "longbows" for the day too, didn't think we'd come up with anything like that for a thousand years 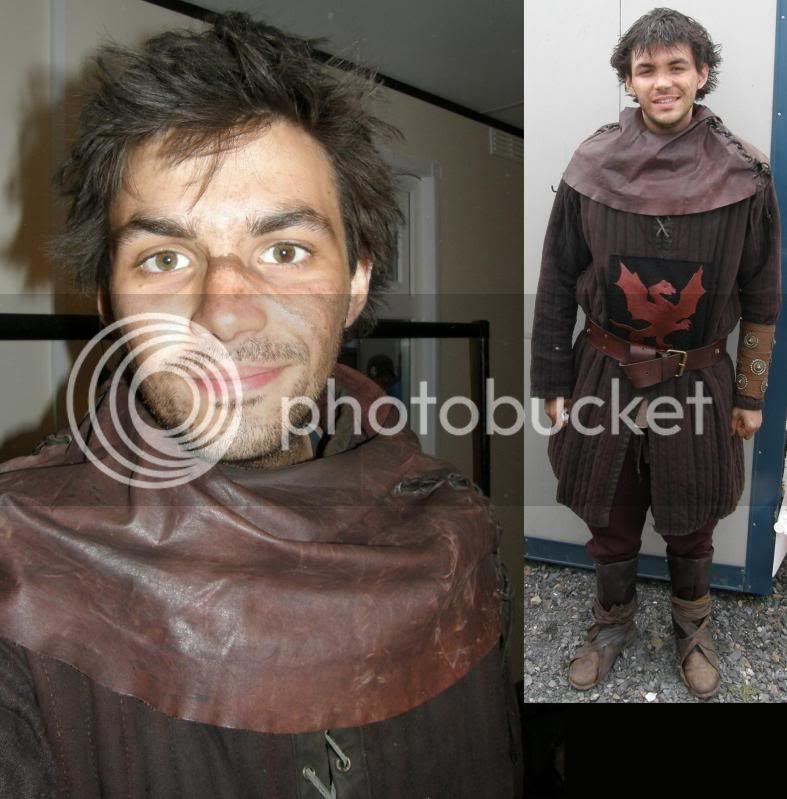 So yeah, I'm either going to be on TV or I'm insane, maybe both. But at least I did something fun eh? Not that physics isn't fun. But I never get to do physics, because nothing ever bloody works does it. I am reluctant to post this because I want to write a proper blog post, but I just haven't got the time to spend. I might go grab some lunch and try post something proper, lots has happened in the past month and so for once I have good things to write about! (I really need to get my camera cable, I wish I knew where it was!)

My last blog was about nothing, so this blog really should be the same, but instead I'm going to try to sum up the last month. On the night before my last blog post Odette's grandad died in hospital, he was a really lovely man and his funeral was touching, hearing the love that he and his wife shared for over 50 years and seeing how they were still madly in love up to the last minutes.
The following week I made an effort to see as many people as I could and went to an open casting in Liberty Hall for Camelot. On a whim I wrote I had gun licences and was "proficient with ranged weapons" and then being the twit I am, seconds before handing it in remembered archery would be a good thing to mention.
The following week I again continued to try see as many friends as I could during my free time, and during my not-so-free-time I was making the poster and preparing the paper for the EPS Plasma Physics Conference in DCU. I also came down with gastroenteritis during that week, on the Wednesday evening, which was great fun I can tell you. That managed to last right through the conference and it was only on the following Saturday, after 10 days of hell that I was able to eat properly again. Great way to lose weight though, I went down to 10.5 stone.
The conference went well, I was a volunteer at it as well as presenting at it (which meant minimal work and lots of free food, if I could have eaten it) and on the Thursday the Gala Event was held in the Guinness Storehouse which was great craic, tons of free and gallons on free drink. The Gravity Bar is great too, love the view, got a beautiful sunset that night. I then spent the weekend dog and house sitting for Odette's family while they were in London which was also good fun, pretty much just watched movies and cleaned but it was fun!
During the last few days of June then I went to view an apartment in Temple Bar with Kevin, it was really very nice, big, secure and quite well kept if a little grubby. So we took it! Signed the lease 2 days after seeing it and started moving stuff in pretty much straight away. Now that leaves this past week, well that has just flown by, on Wednesday I was in Camelot, as mentioned above, which was great fun. Saw Eva Green on horseback (she's not a horse person I'm guessing) and saw Joseph Fiennes doing his level best to run uphill at the castle we were guarding and look mysterious.

Oh also, Snoop Dogg played the Olympia on Tuesday night and we saw him out the window of the apartment, will quickly rack up the famous faces I've seen eh! 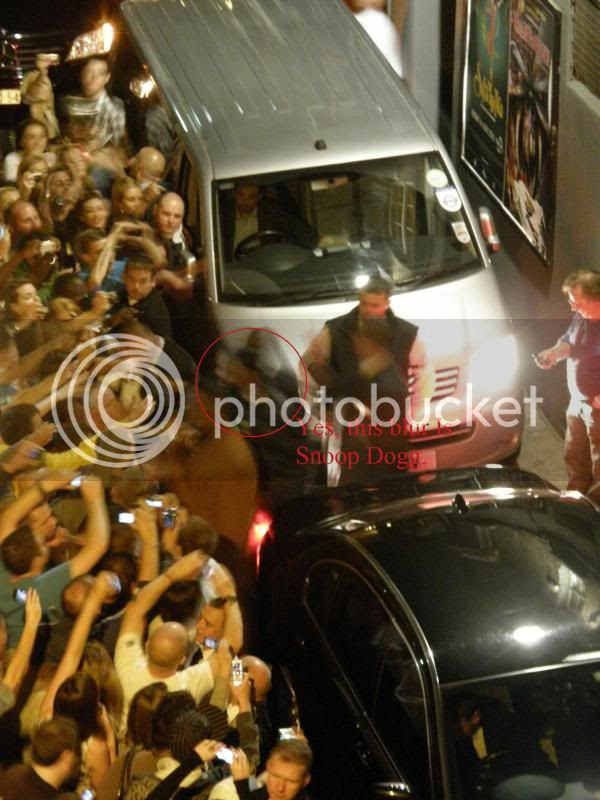 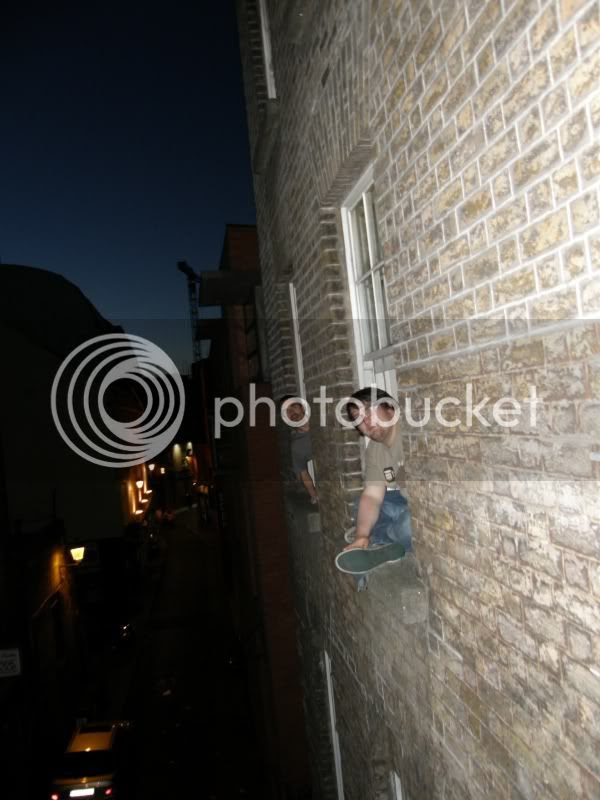 More than a month?

The fuck happened there? A whole month plus change, flown by. Wow.
Well, much has changed really, for once I have things to write about, and no time to write about them! But I will fludge it up ASAP, might try hand writing one tonight, type it up tomorrow. Have to get the scribble pad working, so ya'll can deal with my handwriting.
Posted by Zakerius at 3:07 pm No comments: